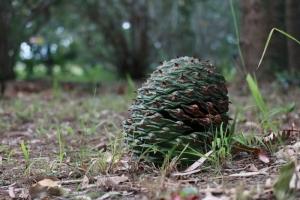 The Australian Aboriginals knew a good thing when they tasted it and consequently in early times would set aside any tribal differences to travel for hundreds of miles to feast on this native bush food. I am in fact talking about the ‘Bunya Nut’. These giant cannon ball-sized pine cones contain between 50 to 100 nuts and weigh as much as 10 kilograms.  So you really don’t want to be hanging around under a Bunya Nut Tree during the fruiting season. The cones are covered in spikes and fall from towering heights of 30-45 metres. Heads up!!  Although nuts are produced each year, traditionally a bumper crop is produced every three years. The fruiting season occurs from December to March.
It’s hard to find anyone who doesn’t like the taste of Bunya Pine nuts. The flavour is described similar to a starchy potato or chestnut. Ask a local the best way to cook a Bunya Nut and they will all tell you something different. Either way the kernel must be removed from the shell before being boiled in salty water or placed in the fire for cooking. Personally I like to throw mine in a pot of water used to cook a nice piece of corned beef and then smother it with butter when it’s done. Yummo!
Believe it or not the humble Bunya Nut has been used in cooking since the beginning of time and is fast becoming one of the most popular forms of bush tucker. Today this bush food can be found in a variety of recipes including pancakes, biscuits and breads to casseroles and hommus. Who would have thought you could be finishing your dinner this Christmas with a Steamed Bunya Nut pudding served with brandy custard and wattle seed ice cream.
So where can you find this bush tucker superfood? Simply follow the bunya trees along the Great Bunya Drive through the South Burnett and venture to the native origins of the Bunya Nut, deep into the subtropical rainforest of the beautiful Bunya Mountain National Park.
The Bunya Mountain National Park is 2.5 to 3 hours from Brisbane and 4 hours from both coasts. The Great Bunya Drive (pictured below) is a 390km self-drive tour which runs from Toowoomba to Gympie, with one of the highlights being the Bunya Mountains. 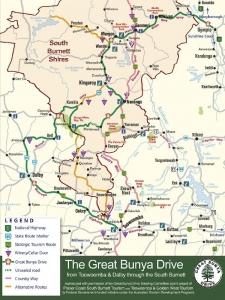 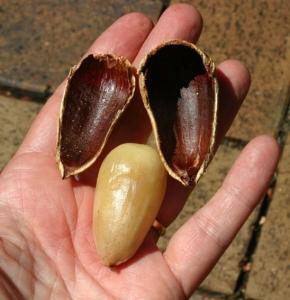 Place the nuts in a jug or bowl and cover with boiling water for 2-3 minutes.  This softens the shells making it easier to cut and makes the brown skin surrounding the nut, stick to the inside of the shell allowing the nut to be removed cleanly.  Use a strong short blade knife or Stanly knife and slice down the length of the nut.  The softened shell will peel away from the nut.  Slice the nut in half and discard the centre pith which can have a bitter after taste.

Place the nuts in boiling water and simmer for 10 minutes.  Cool slightly before shelling to extract the edible nut.  To make a nut meal: place in blender when cold and process to bread crumb  consistency.

To enhance the flavor the nuts can be boiled in the water used for the cooking of corned meat. 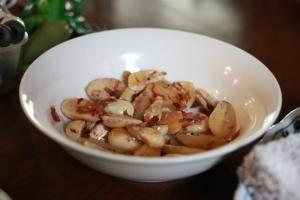 Used shelled nuts (raw or boiled) and toss lightly in a hot pan with melted butter or your favorite oil. Be careful not to overcook as the nut flesh will become hard and leathery. 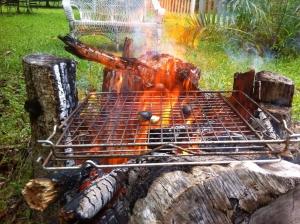 Turn the nuts frequently for even cooking. When cooking directly on the fire, the use of hot ashes gives better results as the shells can ignite on hot coals of flames.