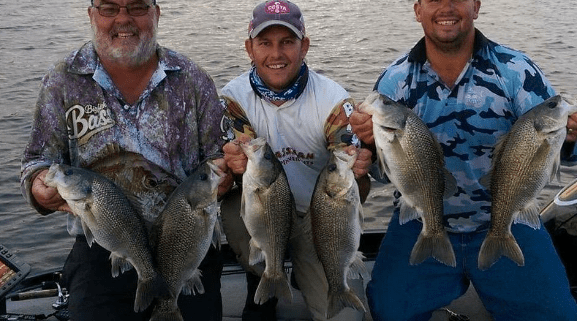 With the unseasonably warm weather hanging around for quite some time the warm weather gear hasn’t had to make much of an appearance of late. The last few weeks however have seen the water temps slowly drop but the fish are still active and still hungry. With the cold moving in fast now, the edge bite has really fired up and you should be able to bag yourself some really healthy bass over the coming months. The great thing is this time of year they Bass and Goldens are fat and healthy and a whole new array of lures can be used to target the natives in our local dams.

Recently the best techniques have been to hit the edges early with lipless cranks and spinnerbaits, rocky or weedy edges being the best to target. Another good way of finding good fish is sounding over the main lake points and large flats in the main basin in search of the large schools that generally congregate at this time of year. In the morning when it’s quiet and still is the best time for this type of fishing because the water temps are at their lowest and the dams at its quietest. Having a good quality sounder is important when trying to locate the schools as you’ll pick up the fish close to the bottom when you’re searching. Once a school is located position the boat towards the school and cast ¼ or 3/8 ounce Eco gear VX or Little Max blades, let the blade hit the bottom and use a slow roll retrieve. Occasionally change it up and use a slow roll and kill technique as the fish will hit the lure when it’s close to the bottom, as it’s falling or just after it’s rolled off the bottom.

Terry Allwood with a giant bass from the edge at Boondooma

Later in the day when the water heats up I’ve found that the fish can be caught well using Nories tail spinners, 12 gram being the best. Cast the tails spinner out with a long cast and let it sink to the bottom, wind up the slack and slowly lift the rod tip then drop it back to the bottom keeping contact with the lure at all times. The fish this time of year love a bait that is falling in their face and the tail spinner suits the bite perfectly. The fish will hit the tail spinner generally as its falling after the lift so be on your toes for the bite. Ice jigs are also a great way of catching the schooled fish as its constantly in their face, keep an eye on the sounder with this technique though as you’ll get more bites when the fish rise off the bottom. This generally means they are flared up and ready to eat.

Bill Schloss, the Author and Terry Allwood hold up a nice brace of bass caught in shallow water on lake Boondooma.
If you’re a keen fly fisherman deep fly is a deadly technique on those schooled fish, fast sink line with a sinking fly in dark colours have been working very well. Try this when the wind is quiet because it can be difficult to cast a fly when the winds blowing over the open water later in the day.
Trollers are getting some good yellow belly in the arms of the dam using deep diving hard bodies. Troll in close to the timber of the rocks in the Boyne arm but make sure that you have a lure retriever handy because you will get snagged occasionally, but your hard work will be rewarded.
Bait fisherman your best chance is to fish the trees in the arms of the dam in 20 to 30 feet of water with live shrimp. I witnessed a couple of bait fisherman catch two cracking bass using shrimp in the Stuart arm, they told me they had caught the shrimp using opera house pots with a bit of steak just below the Kiosk, so it pays to get live bait, even better when you can get it from the dam your fishing in.
Some great reports of good numbers of big red claw coming in, dog biscuits and soft vegetables proving to be great bait for their opera house pots. Rocky ledges and points are the best spots to drop your pots but make sure your pots are clearly marked with your name and address.

Lake Barambah
The fishing over the past month has slowed down a little but you can still catch some very decent fish if you’re up early and fish patiently. The fish have been up on the edge early when the waters cool and I’ve been catching some good Bass and Yellow belly using ½ ounce rigged grub tail plastics. Target rocky ledges with a bit of timber or rocks. As the sun gets higher I always move to the deeper flats and target areas around points and flats, spots like lightening ridge, bass point and Treasure Island are likely spots to find fish sitting out deeper. If you’re not familiar with the places I mentioned, call into the Kiosk, they are always willing to explain where they are. If the regular deeper areas don’t produce it’s a good idea to sound around the outskirts of the dam and find those fish sitting in 15 to 30 feet of water. Once located, target them with the techniques that I mentioned for the Boondooma flats. Blades, tail spinners and ice jigs are the go to lures to use when the fish are sitting out deep. Both dams are reasonably similar but sometimes it does pay to experiment with your lure selection. The bass are getting bigger, models of up to 45 cm have been caught recently off the edges and out on the flats. If your chasing yellow belly, fish tight in around any timber on the dam with lipless cranks or spinner baits, persist long enough and you’re sure to get a couple. Yellow belly over 50cm have been caught recently using this technique, afternoon when the waters warmer proves to be the best time.

Trollers are getting some nice yellow belly up in the timber of an afternoon, troll through the timbered areas up the back of the dam with deep diving hard bodies. Some bass have also been mixed in with their catches.
Bait fisherman have also been having some success, they’ve been catching mixed bags of Yellow belly, silver perch and bass from the timber. Tie up to a tree and use live shrimp as bait. Drop your bait to the bottom and slowly jig the bait, if your first spot doesn’t produce don’t be afraid to move several times until you know you’re sitting on some active fish. The red claw are still around but you’ll have to put in the effort for a feed, target rocky edges or spindly timber and use soft vegies for bait.
Park News
There have been some exciting developments within the shop at Yallakool and Boondooma, keep a close eye out on the tackle range at both parks as the range grows and become more specific to the fish in both dams. Stay tuned, more to come.
Also if you’re looking at coming out our way and wanting to stay at either park give us a call and we’ll book your site tailored to your needs. Give Yallakool a call on 07 4168 4746 or Boondooma on 07 4168 9694.
That’s this month’s wrap up of the two dams.
Until next time, tight lines and bent rods.
Matthew Langford