0 Comments / in News / by Stacey Perrett

It’s a good feeling to know that summer is finally on its way, the water temps in both dams are rising considerably during the day which makes for some pretty intense fishing at times. This time of year is up there with my favourite times to fish for Australian bass and yellow belly in our impoundments because they can be caught thick and fast as the bigger bass and yellow belly become vulnerable. Our natives like to suspend in the deeper water when the water warms and this opens up a variety of techniques including trolling as a great way to catch some big fish during these hotter months.

The flavour of the month this month is Bass, and big ones at that, but it does pay to move around a bit in search of the right spot. Productive areas recently have been mainly the dam wall, the drop off from the shallower flats and the Spindly timber in the Stuart and the Boyne arms of the dam. Sound around the flats in search of the schools and cast ½ ounce rigged soft plastics, 12 – 20 gram spoons, Tail spinners and Blades. 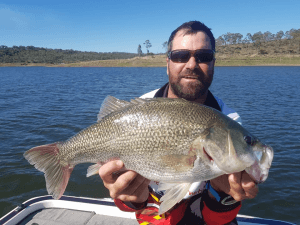 The timber is the place I would head to first as the fish hit hard and it’s a real challenge to get them out with your gear still in one piece. For this type of fishing I always use a stiff spin rod with some guts, a 2500 size spin reel for extra torque, spooled with 12 pound braid and 14 to 20 pound leader. This may sound heavy but just imagine a 50cm bass hitting your lure as it’s rolled between two big clumps of spindly timber, it really counts for some exciting fishing. The lure of choice for this type of fishing is definitely a spinnerbait, or a lipless crankbait. I like to throw a Bassman Compact in 3/8 or 5/8 ounce. Once you have a combo similar to the above mentioned, head up the arms of the dam and cast in as close to the spindly trees as you can, let the lure sink for 3 to 5 seconds and start a slow roll. Make sure the drag is done up solid so they can’t get you in the timber without a hard fight. Once the bite comes give him everything you’ve got to get the fish away from any structure otherwise the fight will be short and you’ll be left wondering what happened. 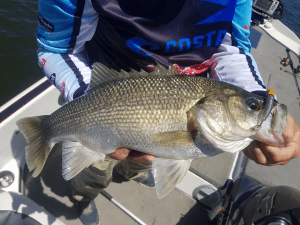 A big healthy bass from the suspended fish in deep water, keeping the lure in the zone is the key to take fish like this.

If the timber isn’t producing, the next place I’ll look are the deep water off any prominent points or parallel to any steep rock walls. I’ll use my sounder to sound the fish sitting in that optimal depth, which is generally 20ft in the Thermocline. When I’m happy that ive found a good concentration of fish, I will pull up and begin casting 3” to 4” soft plastics rigged with a ½ ounce or 5/8 ounce head. With a big long cast over the areas that I found the fish, I will let the jig head sink 7 to 10 seconds and begin a slow retrieve back to the boat with a couple of twitches mixed in. The same can be done with a 12 gram Norries spoon. Continue this technique untill you start to feel a few taps on the plastic or spoon, when you feel a tap its important to keep that slow wind going unitll you feel weight on the line, slowly lift the rod tip until you feel the weight of the fish. At this point the fish will know its hooked and make some great runs back down into the deeper water. Keep your drag fairly loose so that the hook doesn’t pull on the way back to the boat.

Trollers have been starting to pick up some nice Golden Perch and Bass trolling up in the arms of the dam as well as the main lake points and edges using deep diving hard bodies.

Bait fisherman have been bringing in consistent catches of yellow belly, bass and eel tail catfish fishing in the timbered arms. Best baits have been live shrimps, saltwater yabbies and worms jigged off the bottom.

Red claw have just started to pick up a bit with the consistent warm weather around the rocky edges.

The fishing at Barambah has been spectacular with lots of fish being caught on everything, casting lures, jigging a bait and trolling. The key however is moving around to find the fish. The fish this month have been moving around considerably, I’ve found that the fish will be on one flat or bank one day then the next day they have moved a few hundred meters. This is not uncommon during the warmer months because the fish are active and purely moving around the dam with the bait they are feeding on. 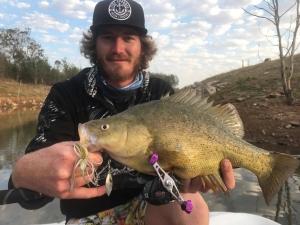 I always love fishing BP and I always like to go and start on the banks in the morning, I commonly cast lipless cranks or spinnerbaits to get an early reaction bite. The banks I’ll fish will generally be fairly steep with a bit of rock or structure. Another thing to keep an eye on is the sounder whilst you’re fishing a bank. It pays to make sure that there is bait or fish sporadically coming through. This obviously increases the chances of fish being caught on the bank that you’re targeting. Later in the day when the sun starts to get high I move out to the flats and commonly target areas in the 15 to 20 foot range. The fish seem to really relate well to this depth in BP and it pays to visit multiple areas like this until you find a good school. Another thing to note that in summer time in BP the fish like to sit high in the thermocline (or comfortable water) If you’re on the water and this is the case slow roll any smaller bait like a blade, through these suspended fish. In this situation it’s not uncommon to have a great session when the fish are sitting high in the water column. 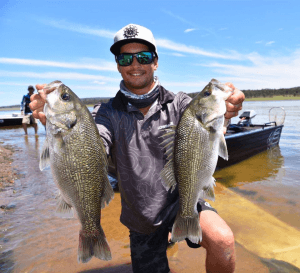 Trollers are having the same luck by trolling the edges of the dam and out in the 15 to 20 foot range with deep diving hard bodies, most trollers won’t have to go far before hooking up with a fish or two.

Those using bait, the fish are coming from most locations close to the bank using, live shrimp, salt water yabbies and worms fished hard on the bottom.

Red claw are also on the comeback as the water warms considerably.

Make sure you book your camp site for the 2018 Boondooma Dam Yellow belly fishing comp being held on the 10th and 11th of February. $20 entry for adults and $5 for juniors (16 years and under). There are live and dead weight divisions with prizes for Bass, Yellow belly, Silver and Spangled perch. There are thousands of dollars’ worth of prizes up for grabs, with food and drinks available at the event. It’s one comp you don’t want to miss. Call Lake Boondooma kiosk to make a camp site booking on (07) 4168 9694. Finally also don’t forget that this year’s New Year’s eve party at Lake Boondooma is shaping up to be the biggest and best we’ve seen, so write that down in your calendar and book a site for this year’s fireworks spectacular.

Until next time, tight lines and bent rods

Storm build ups make the fishing in the South Burnett fun!
Your Bookmarks