Since the onset of winter the fishing hasn’t changed considerably in the South Burnett Region, with some cracking catches of our native fish being recorded. No matter what type of angler you are, you’re sure to hook up with a few fish at Boondooma and Barambah over the coming weeks.

Over the past few months the fish have moved up somewhat shallow and if you find yourself on an edge that has some scattered weed, you could find an opportunity for a fantastic edge bite.  If you’re an avid lure fisherman like me, this is where I would start and end the day. The secret has been throwing 3/8 spinnerbaits up as tight as you can to the weed edge and rolling it back with a slow wind retrieve. I like to use the 3/8 Carls compact Bassman spinnerbait with one small Colorado blade, as this stops any weed becoming entangled in the blade assembly and stopping the spinnerbait from working. If you throw up tight to the weed edge and roll out you will get stuck in the weed occasionally, the best trick is to give the rod tip a quick rip to free the spinnerbait and continue the retrieve. Remember early morning and late afternoon is the best time to target the weed as the fish are up in there ready to ambush any offering that is thrown their way. I’ve caught some cracking 50cm+ fish using this method so stick with it, as it could result in a trophy bass being landed. The other option that has been working is using suspending jerk baits to the weed, use the same method as I described above and make sure you add plenty of pauses to your retrieve. Jerk baiting the weed is a cool way to fish as suddenly your drag could be peeling of that reel, before you even realise you’ve had a hit. 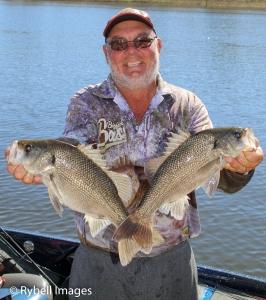 Bill Schloss with a pair of Cracking bass from Boondooma.

Later in the day when the sun is high and the breeze picks up, I like to move out deeper around the flats and target schooling fish with, Nories tail spinners, soft vibes and VX blades. Pelican point, Barbour’s pole and Death Valley are good spots to start looking for schools. Please check in with the kiosk if you’re unsure of the names of places around the dam. The secret is using your sounder to slowly move around until you’ve located the fish sitting close to the bottom, once located, start to throw your baits with long casts and keep the lure as close to the bottom as you can. I like to use a very slow retrieve or a hooping retrieve to induce a strike. It’s also a good idea to move around a bit as the fish work out very quickly that you’re there, native fish don’t respond well to pressure or noise. 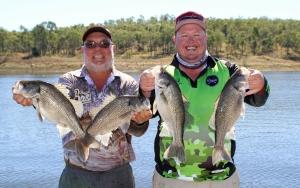 Bait fisherman have been getting good catches of yellow belly in the Boyne arm of the dam fishing close to trees and the Boyne rocks. Most have been using saltwater yabbies, shrimps and worms. It’s a good idea to use smaller sinkers as the bite is hard to detect if you’re using huge ball sinkers. Simply tie up to a tree drop your bait to the bottom and slowly move the bait up and down off the bottom. It won’t be long until you get a bite.

Trollers have also been doing quite well on the yellow belly in the Boyne and Stuart arms in the timber with smaller deep diving hard bodies. Make sure you take a tackle retriever with you as you’re bound to get a snag or two whilst trolling.

Redclaw are still coming in pretty good numbers around the shallow rocky edges, soft fruits and vegetables have been the best bait during the winter months.

Typically, in winter, BP dam’s fish move in closer to the edge and can be caught using a few methods. Lately the best edge fishing methods have been Eco gear ZX blades and Jerk baits cast up shallow. Slower moving baits like the ones suggested are dynamite in winter the key is small hops off the bottom near the edge with the ZX blades and long pauses near the edge with the jerkbaits.

The deeper flats have also been producing lots of fish be it bass or yellow belly. Jigging blades has been the best method. Most anglers have been sounding fish in about 20ft and sitting on top of them, Eco gear ZX blades have been the real standout as they have two small stinger hooks attached. Drop them down to the bottom and hop them with small sharp hops, a fish only needs to touch them and the stinger hooks will grab them very quickly. Best spots have been the big flat out from the main dam wall. 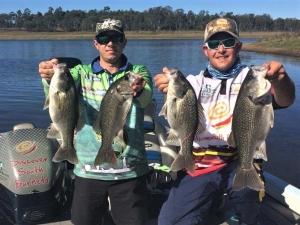 The Author and Nick Anderson with some nice bass from the edge at BP.

It’s Valuable to remember that most fish in the dam are gorging themselves on small bony bream so it’s a great idea to throw anything that looks like a small bait fish. Look for steeper banks that hold some timber or rocks as this is a likely place that fish will be looking for bait up shallow. Out deeper try to find flats that are close to significant drop offs or the main submerged creek line. 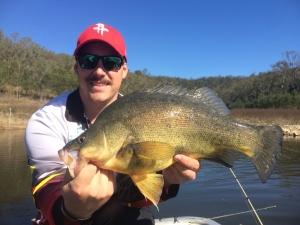 Dylan Fryer with a beautiful yellow belly from the edge on a jerk bait.

Bait fisherman have been getting a ton of nice fish from BP dam. Most have been tying off to trees and fishing saltwater yabbies and shrimps vertical with small hops. I witnessed a couple catch their bag limit in under an hour just recently, I was very impressed and almost switched to bait. Big quality yellow belly and good numbers of bass have been coming on bait.

Trollers are catching the odd fish trolling around the main lake points, small deep diving hard bodies are the best. Redclaw have gone very quiet and should start popping back up as the water gets warmer. 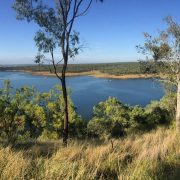 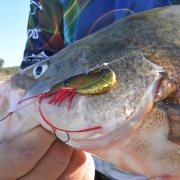 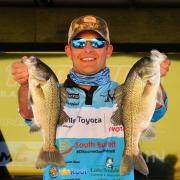 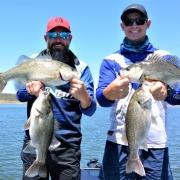 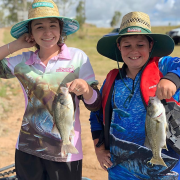 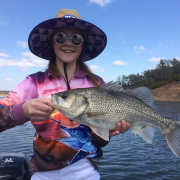 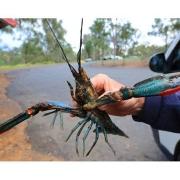 Big Natives start to play in the South Burnett.

Freshwater fishing a big hit in the South Burnett.
Your Bookmarks