Water levels low but fishing remains on a high!

The Christmas and new year holiday crowds have come and gone but the fishing has remained the same. Both dams in the South Burnett are fishing the best they ever have despite the low water levels. Boondooma is producing some big quality bass and golden perch. While BP is producing big numbers of fish of varying species. If you’re thinking of coming for a fish, you can’t go wrong with either dam. The South Burnett is the place to be for some fantastic freshwater fishing.
Boondooma

The dam at this time of year is beautiful early of a morning and there’s plenty of wildlife to watch and enjoy throughout the day. With the summer bite patterns continuing, it makes for some exciting fishing on Lake Boondooma, particularly later in the afternoons. Lately the trend has been to fish the timbers of the Boyne or Stuart arm early with 5/8 Bassman spinnerbaits or lipless cranks in the morning. During the afternoon target the deeper sections of the dam up near the dam wall and rocky edges with ½ ounce rigged Eco gear power shads or curl tail grubs.
If I’m fishing Boondooma during the summer months, I’ll first start in the timber early of a morning as the fish are in amongst the trees looking for an easy meal. In the arms the fish are holding very close to structure and you’ll need to get your lures in as close as you can to get a bite. Look for spindly timber, trust me there’s a lot of it. Lures of choice for this scenario are, 5/8 or 3/8 Bassman Spinner baits and any sinking lipless Crank bait. Give your lure up to 5 seconds to sink down and start a slow wind. It’s important to make sure that you have a lure retriever with you as you will get snagged on the trees occasionally but if you’re getting snagged you know you’re in the thick of it. Keep moving from tree to tree or structure to structure and persist as your lure WILL be eaten eventually by a hungry fish. 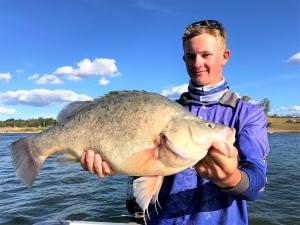 Lachlan Wheeler with a Monster 65cm Yellow belly from Boondooma

The fish in the afternoon tend to bite better in the open water when the water heats up. I’ve found that the fish move deeper into the timber as the day progresses and find the fish in the deeper water are easier to target. To find fish in the deep water I’ll use my sounder to sound the fish sitting in that optimal depth of 15 to 25 feet. When I’m happy that I’ve found a good concentration of fish, I will pull up and begin casting 3” to 4” soft plastics rigged with a ½ ounce head. With a big long cast over the areas that I’ve found the fish, I will let the jig head sink 7 to 10 seconds and begin a slow retrieve back to the boat with a couple of twitches mixed in. Continue this technique untill you start to feel a few taps on the plastic, when you feel a tap its important to keep that slow wind going (without striking) unitll you feel weight on the line, slowly lift the rod tip until you feel the weight of the fish. At this point the fish will know its hooked and make some great runs back down into the deeper water. Keep your drag fairly loose so that the hook doesn’t pull on the way back to the boat
Trollers are picking up some great bass and yellow belly trolling around the deeper sections of the dam, targeting those suspended fish. Make sure to have plenty of deep divers handy, lures that dive 15 to 20 feet will be the ones that get you onto consistent fish.

Bait fisherman are consistently getting amongst a mixed bag of fish up in the timbered arms of the dam using worms and fresh shrimp. It may even pay to move to the main basin and let your bait suspend under the boat in that 15 to 25 foot range. Drifting with the wind is a great way to cover water with your bait under the boat. Eventually it will cross paths with a hungry fish or two.
Red claw numbers are also starting to pick up with some real big ones amongst them, so make sure your pack the opera houses if you’re coming out for a day or two.

Lake Barambah
Bait fisherman if you want a good feed of fish then the timber is the place to be. Tie off any trees close to the old creek line and you’re in with a great shot of getting a good feed. Shrimps, worms and saltwater yabbies are the pick of the bait.

The red claw are moving and there are reports of a few good catches coming in. Most are being caught near any rocky walls or ledges and soft vegetables are the key to getting some big red claw in the pots.

If your keen on trolling then I can suggest trolling heavy 5/8 spinnerbaits, 3/8 blades or any deep diving hard body in front of the main dam wall, around the island at lightening ridge or around bass point. If you’re not familiar with these areas drop into the kiosk and ask the team, there always happy to help out.

If you’re a lure fisherman like me, I’ve been finding a lot of fish hanging off the deeper edges and steep drop-offs in the main basin early of a morning and late of an afternoon. If the steep edge has timber on it also then you’re doubling your chances at a good fish. Casting ½ ounce spinnerbaits into these areas seems to be the most productive method. Cast your spinnerbait up tight against the bank and begin a slow retrieve, also target the areas either side or in between any spindly trees. I’ve caught some good bass using this method.

Not only are the edges producing good fish but later in the day, when the suns higher in the sky I’ve found that the bass move out onto the deeper flats. I’ve recently had a few sessions with Ben Faro on one such flat and we produced some great catches of good quality bass using ½ ounce rigged plastics. Long casts, letting the plastic sink to the bottom and using a burn and kill retrieve was the key to getting the fish to hit the lure hard. Around lightening ridge and bass point have been the most productive areas recently for schooled fish so give it a go if you have the chance. 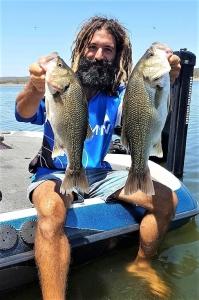 Ben Faro with a nice brace of bass from BP 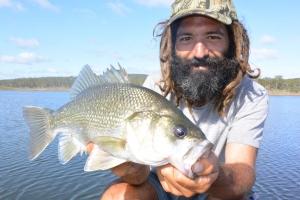 Park News
As I write this report both dams water levels are quite low but there’s still plenty of water at both dams for water activities. There’s still heaps of room for skiing and fishing, so don’t let the water levels deter you from visiting. As far as fishing goes my prediction is that we will start to see more regular catches of 50 + cm bass come from BP dam. BP may just become the big bass capital of the country within a few short years. Some very exciting times ahead.
Until next month, tight lines and bent rods.
Matthew Langford

South Burnett Wine and Food in the Park Festival
Your Bookmarks